Admit It, Quit It, Get On With It!

Admit It, Quit It, Get On With It! 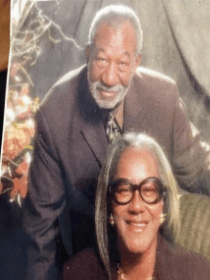 A mild-mannered, self-learner, self-starter with a natural ability to teach, person of moral-consciousness, entrepreneurial, business-minded, inquisitive, honest, family-oriented, risk-taker, gentle-natured, adventurous, loving and God-fearing man, Bishop Dennis B. Evan. Jr. was born October 16, 1930 to Dennis Evans and Olevia Hudson.  He grew up with one brother and three sisters and in elementary school had an interest in baseball but was excluded from playing the sport by his fifth grade teacher because he asked who drew the crooked boundary lines around the basketball court. He was driving a stick-shift by the age of 13: was driving and providing rides through a Gittny -an Uber-like service- with his father at the age of 17: and became the oldest of two more brothers that were born after August 1951 when he joined the Marine Corp at the age of 20.

As a young man in his early 20s, Bishop Dennis B. Evans, Jr. maintained his two-year commitment to military services and traveled to places like Korea and Japan. The time he served in the military taught him important disciplines, and he did well while under supervision. He also developed self-confidence and learned how to persevere and to follow his vision. Developing these skills as a young man contributed to his ability to achieve a level of peace, love, and tranquility in his life.

In 1953, after serving time in the military, Bishop Evans began having difficulty maintaining focus on his education and made three attempts at finishing high school. In his first attempt, he went to Manuel Arts High School in Los Angeles, CA, but dropped out after a short period. In another attempt, he accepted a GI bill to attend Radio and Television school offered through the military, but he soon lost focus on that, dropped out, and left Los Angeles, California. Years later he moved to Pasadena, California and met the then 21-year-old unsaved Dorothy Evans while in a night club. At that time, he was 27 years old and had made his third attempt at completing high school by enrolling himself into John Muir High. Instead he dropped out and started his own stucco business refurbishing houses. However, at some point, he was given an honorary high school diploma.

Living next door to a Christian neighbor in 1965 put the then young and unsaved Dennis B. Evans, Jr. in a position to accept salvation. Both his then saved young girlfriend, Dorothy Evans and his neighbor prayed with him so that he gave his life to God the same night they prayed. He joined Pastor Roger DeCuir’s church a few months after giving his life to Christ, and Pastor DeCuir -at the time- held services in Los Angeles, California. He allowed Pastor DeCuir to begin having services in his home for six months after leaving Los Angeles, CA and before moving into a new location. The young Dennis B. Evans, Jr. felt God’s calling on his life to start up the Refuge Christian Center Church ministry in 1976 while still attending Pastor Roger DeCuir’s ministry, and he answered the call January 2, 1977.